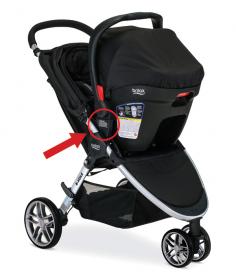 The problem occurs when the strollers are in the travel system mode, when the car seat component is attached to the stroller frame using click and go receivers. The car seats have been reported to unexpectedly disconnecting from the stroller component and falling to the ground.

Britax has received 33 reports of car seats unexpectedly disconnecting from the strollers and falling to the ground, resulting in 26 reports of injuries to children, including scratches, bruises, cuts and bumps to the head. In addition, Britax is aware of 1,337 reports of strollers with damaged Click & Go receiver mounts.

Recall number: 17-088
Britax-B-Agile stroller (in travel system mode) and BOB Motion Strollers with Click & Go receivers
Hazard: A damaged receiver mount on the stroller can cause the car seat to disengage and fall unexpectedly, posing a fall hazard to infants in the car seat.
Remedy: Repair
Consumer Contact: Britax online at www.us.britax.com and click on the Safety Notice on the homepage or visit us.britax.com/recall, call toll-free at 844-227-0300 from 8:30 a.m.to 7 p.m. ET Monday through Friday and from 9 a.m. to 3 p.m. ET Saturday.

Wayne Hogan, a Jacksonville native, has been with the firm since 1977. He graduated from Florida State University, where he received both his bachelor’s and J.D. degrees. He specializes in all areas of personal injury law. In addition to participating in many professional associations, he and his wife, Pat, are also actively involved in the community.
PrevPreviousSargento Cheese Recalled
NextChrysler and Mazda RecallsNext